The Nokia X7 is a terminal with a stunning design that will appeal to users who require a permanent connection and an intuitive interface. 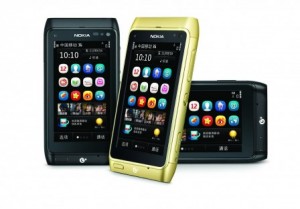 It has an AMOLED capacitive touch screen that runs 4 inch Clear Black Display technology (CBD), with a 16:9 HD (640 x 360 pixel resolution). Resolution values can be very weak for the big screen that it lodges, but the fact it is capacitive to operate in a flexible and intuitive way.

The design is without doubt one of the most important points of the terminal. Nokia has risked with this aspect that stands out from the usual line of the Finnish. It has a square design, straight cuts, somewhat initially clumsy (146g), but with a metallic finish care. In the four corners are introduced speakers for quality sound.

The smartphone comes with the operating system Symbian^3 Anna; with a fresh new look, and required between users. The user interface is simple and intuitive. It offers a great social network integration and a browser more than competitive for those who want to be connected constantly.

Thus, connectivity is another of the strengths of the smartphone. You can connect to Wi-Fi and is perfectly compatible with 3G networks. In addition, users may require using the mobile as a modem connection when they need to have a laptop or tablet. It has a 350 MB internal memory but comes with an external SD 8GB which is not bad and is expandable up to 32 GB.

Among the most brilliant performance also highlights the 8 megapixel camera that includes and great capacity as a media player. It is compatible with all major music and video formats.