Researchers at MIT (Massachusetts Institute of Technology) working in Wi-Vi, a system that detects human movement through walls by using two antennas and a Wi-Fi signal receiver, as reported by the institution itself. 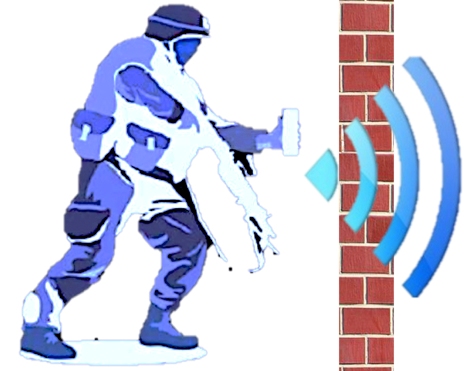 Wi-Vi might help, for example, rescue teams are searching for survivors after landslides and earthquakes, the policemen who need to identify how many criminals hide in a building, and as well as evolve toward a personal security device that will allow us to know if anyone is still quietly in a poorly lit street.

This device would save the cost of expensive and bulky radar and sonar systems, which also run through a portion of the electromagnetic spectrum that is available only for military use.

Two antennas and a receiver
The people responsible for the project, professor of the MIT Dina Katabi and his student Fadel Adib, have succeeded in developing Wi-Fi signal with a system that is very similar in performance to the radar.

Normally, when transmitting Wi-Fi signal from one room to another, some of this is simply absorbed by the wall, bouncing off the people who are on the other side. However, there is a small percentage of waves that do reach the other room and reflected in the objects found there. What Katabi and Adib have done has been to develop a technology that precisely cancels these past reflections and is left alone with those belonging to moving objects. As the human body.

They have achieved using two antennas that transmit WiFi signals nearly identical, except for the fact that is the inverse of the other and therefore cancel. Thus, all reflections from stationary objects such as walls and furniture are canceled, and only created by changing movements reach the receiver, which is capable of detecting where the individual is at every moment.

Other applications
In addition to the aforementioned applications, Wi-Vi can also detect the gestures of someone who is in another room, for example, a movement of arms. This opens the possibility of creating a movement-based interface, to allow, if necessary, turn off the light from other rooms.

As has been pointed out to MIT a Microsoft researcher, Venkat Padmanabhan, this progress is very interesting in the sense that it eliminates the need for the user this in front of the motion detector to make it work, something which also opens new scenarios for the field of interactive gaming.