Canon has launched the PowerShot N, a type of digital camera that promises a different approach to capturing images spontaneously and creatively. Also lets you share photos instantly through social networks. 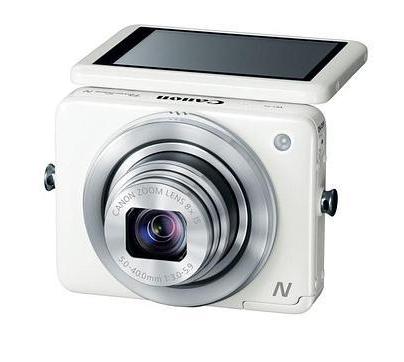 Its square design is unconventional as well as rings on the lens to zoom, the trigger and flip-up touch screen. Creative Shooting mode generates an unexpected selection of treatments with all the photos. The PowerShot N can be the best companion of a “smartphone”, as it is designed to share pictures in real time thanks to a wireless connection.

When using Creative Shooting mode, the camera analyzes the scene and decides which of the available elements could improve the picture. Consider multiple variables, such as composition, exposure, focus point, white balance, gradation and contrast. In addition, you can add a special touch with the miniature effect, soft focus, toy and monochrome camera effect.

The creative dynamism relies on simplicity to aim and shoot. PowerShot N has the Hybrid Automatic that records the four seconds that preceding each photo, with a resolution of 720p, before using Smart Auto technology that decides the best settings to capture the perfect shot.

To share the connection button is used to interact with mobile devices. Users can upload their photos and videos to social networks like Facebook and YouTube just after catching. At home, you can print the photos without the need for cables or transferred to a computer. The GPS can also add a picture about the situation from a smartphone or a supported tablet.

In terms of design, highlights the target ring system: the lens ring can be rotated in any direction to activate the zoom function, while the second ring is used as a trigger. This lets you use the camera in any position.

The capacitive touch screen 7.1cm (2.8″) allows users easy control of essential functions such as focus or trigger, with a simple touch. Available in white and black, square-shaped metal body is dominated by an 8x optical zoom lens of 28 mm. ZoomPlus technology makes it possible to capture detailed images at full resolution with up to 16x zoom.

The dimensions (78.6 x 60.2 x 29.3 mm) with the screen and the target allow being stored in the pocket. In addition, recharge via USB provides extra convenience because you can charge the camera quickly and easily during travel.

Combining a high-sensitivity CMOS sensor with 12.1 megapixels and a DIGIC 5 image processor makes it possible for the HS System of the camera has a maximum sensitivity of 6400 ISO to generate sharp images even in low light conditions. The powerful optical zoom lens 8x has IS Intelligent, that automatically applies the stabilization of the most appropriate image. You can also record Full HD video (1080p). The camera price is 300 euros.

Improvement beta version of the Project 1709
In addition to their new cameras, Canon has updated the beta version of its Project 1709, the new platform for image management in the cloud. Its version 1.1 offers the possibility of complete integration in Flickr, and new management and organizational characteristics.

This version can now post pictures and comments directly to Flickr from within the Project 1709 interface and importing images already stored on Flickr before. The new Project 1709 includes the ability to change the names of the files, rotate, and delete images, creates albums and adds improved search function.

The project evolves with the initiatives of Canon, to which are added the suggestions of beta users. Canon will continue to develop this service until they are finally launched to the public, scheduled for this year.