As you know, those games that have a complex background and a number of options almost endless gameplay, become perfect to exploit all its aspects in a comprehensive guide. 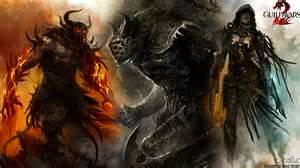 So you know, if you are fans of massive role-playing video games in general, and particularly Guild Wars universe, here we will make periodic updates revealing all the details, tricks and secrets of the game.

History
The context of Guild Wars 2 takes us 300 years beyond the events of the last chapter of the saga. This time, the conflicts in Tyria are the order of the day, and there are few disputes that extend between the different peoples and races of the world. But something is about to change: the ancient Dragons have risen and seek revenge, unleashing their fury and their power over Tyria in order to dominate the known world. Given this conflict can only be one: the cooperation of each and every one of the races that make up the land of Tera to join forces and, thus, have any chance in this battle of epic proportions.

Features
Guild Wars 2 is a massively multiplayer online game, where our actions have a huge impact on persistent world. In Tyria, be able to develop the skills of our characters to meet challenges and increasingly challenging missions, while we take the dynamic events that happen during the game to immerse us in fun side quests. Its complexity makes Guild Wars 2 one of the richest and most ambitious game in the universe of the current MMORPG.