There are only two smartphones with curved screen. One is the Samsung Galaxy Round and the other, the LG G Flex . None of these phones is the top end of respective companies. In fact, weeks ago, both companies submitted its flagships. Samsung did with the Galaxy S5 and LG with the G3. 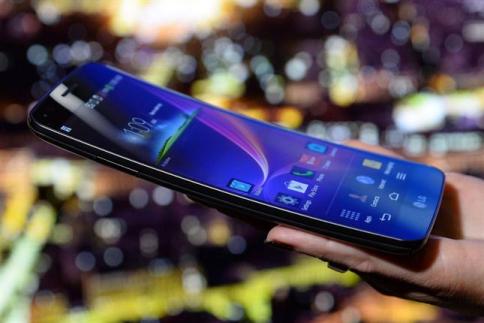 The first interaction when holding the phone with the screen occurs. It’s almost impossible not to give it spins back and forth and appreciate its curvature. It is not very pronounced, but flexible. If enough pressure is exerted on its back and the phone face down, the structure of the cell yields to be flat. The technology used for this is called Plastic OLED and has Gorilla Glass 2 protection. G Flex lacks front and side buttons.

The buttons to interact with the Android operating system found on the back of the phone. From there you can raise and lower the volume of calls, command the front camera (2 megapixel). The button layout is not new, but it is a characteristic inherited from the popular G2 and also used in the new G3.

The back cover of Flex is self-cure. That is, if a lower peel occurs can be eliminated completely by rubbing on it and generating heat. However if the damage is deeper, the cover will be damaged. Demonstrating this, the phone used to test this note had three major scratches.

Experience of use
When you turn on device and interact with the phone everything is fine. The speed and performance offered by the Snapdragon 800 quad-core processor at 2.2GHz and 2GB RAM make the phone unfold like clockwork.

The first thing to test cell is invited horizontal media playback, using the curvature of the screen. By including a horizontal curved screen, the LG G Flex tries to seduce the user with a cinema-like experience, also provided by the new curved TVs.

We tested a Netflix and watch some movies not notice significant differences in experience with large flat screens size. That is, the curved screen was interesting but not determinative.

The latest bad news is that the screen produces a kind of noise in the image, losing sharpness to observe in detail a picture taken with its excellent 13 megapixel main camera. The question is settled by passing the pictures to the computer.

The internal memory included in the G Flex is 32 GB, but does not include a micro SD slot, the space is more than enough there to protect multimedia content and install many apps.

On the other hand it is worth noting its 3500 mAh battery that offers nearly two days of use without recharging and makes calls using Wi-Fi Internet regularly.

Inside
The G Flex comes with a 4.2.2 Android which can be updated to KitKat in the future. By the side of apps some hits are like QSlide, which allows you to receive notifications of the mails arrival and SMS over applications that you have open at that time. Also Qremote, a remote control of that the infrared issuer of the phone makes use to control a wide range of TV sets. Finally the highly efficient use of Quick Memo, a very efficient sticky notes pad.

Conclusion
The LG G Flex is a very good device that in some benchmarks ranks ahead of other high-end phones like the Galaxy S5 and HTC One. The experience of the curved screen is not what ends up weighing in your purchase, but its size and power up the system.

Prices vary depending on operator; the only one at the moment has a definite value for this cell being Personal: 6499 pesos. The phone also gets released at a price of 11,999 pesos.