The new Macbook Air and Macbook Pro will arrive in June 2013. 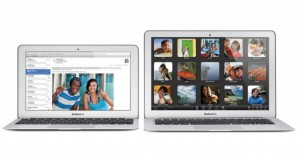 For those who are looking forward to hearing news of the Apple world today we bring you interesting news. And we do it in the hand of the announcement of the upcoming release of Apple laptops, that if you take a look at the schedules of presentations will realize that it is up to those who are renewed MacBook Air and MacBook Pro.

And although there will be major changes in terms of processors, probably in terms of functions, presentation of new apps and in some cases some say also facing the screen and even the camera, the truth is that there will be no design changes in the MacBook Air and MacBook Pro, which of insurance many people waits, will not come.

The MacBook Air and MacBook Pro will remain as they are. That is to say, that not going to see a new portable device on the outside, as many would have liked and almost certain that it will keep the same dimensions. With this, if you are of those who expected change to buy it, already have free rein. As for the exact date of departure, has not yet released the day, but what we do know is to be presented in June 2013.