It is a fact: efficiency is one of the great advantages that robots have against humans. The machines are able to perform many tasks better than we, in less time and without needing rest, qualities that make them the perfect operator. 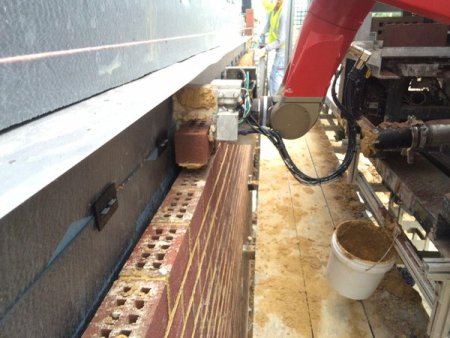 Many experts predict the advent of the Fourth Industrial Revolution, and if you take a look at the technology that surrounds us, you will agree that there is no shortage of evidence to think that there is little left for workers to be replaced by machines. The figures speak for themselves: in a Chinese mobile phone factory they have already done so and thanks to this their productivity has grown 250%.

Now, we have known a robot perfectly qualified to work side by side with the construction workers. It is called SAM (Semi-Automated Mason) and has the ability to lay bricks six times faster than a human. The machine is capable of laying an average of 3,000 bricks every day, while human namesakes only manage to place 500 in each work day.

SAM is composed by a mobile platform that adapts to the characteristics of the terrain and stabilizes to the robot, a cement pump, a robotic arm and a tank for the bricks provided by an operator.

One of the main challenges faced by its developers was to stabilize the robot, since, unlike other models working indoors, the conditions of a work are not predictable and the machine has to face the inclement weather such as wind or rain. The platform that supports SAM is the solution, because it provides the adaptable support that it needs to place the bricks accurately.

However, this brick laying robot is not intended to replace human construction workers, but to work in collaboration with them. This is ensured by its manufacturers, which indicate that it is designed to be a companion of the humans that allows increasing the production of the crew between 3 and 5 times.