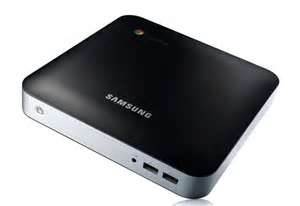 So looks the new series of mini desktop Chrome Box computers. Is it a bird? Is it a plane? There is a Chrome Box. It’s that simple. It’s minimalist. And starting with that gives will not take much of Cupertino to revive the issue of the demands now in this case by the desktop computers in miniature version. Still, today we will put aside the feud between the two giant and focus on the gadget itself, the Samsung Series 3 Chromebox.