Researchers at the Massachusetts Institute of Technology (MIT) have developed a robot that mimics the movements of the cheetah; it can jump obstacles and run through the grass 16 kilometers per hour without help; while it can reach almost 50 miles per hour on a treadmill, assisted with cables. 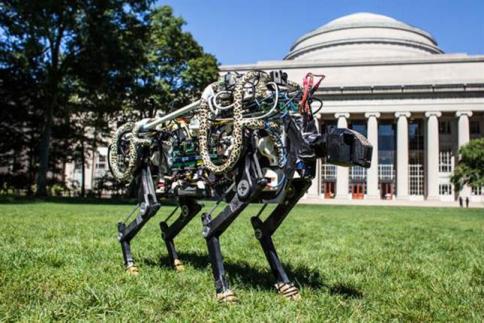 “The cheetah is the fastest land animal on Earth, able to accelerate to 96.5 mph in just seconds. As accelerates to its maximum speed, pumped legs in unison, jumping up to the canter” details the MIT in a statement.

With that movement as objective, researchers of the laboratory of biometric Robotics at MIT developed an algorithm that allows every mechanical leg “exercise a certain amount of force in the split second in which hits the ground, in order to maintain a given speed”, a similar principle to that used by sprinters, according to Professor of Mechanical Engineering Institute, Sangbae Kim.

In this way, the robot can maintain a constant speed even after jumping obstacles up to 33 centimeters, and do so without assistance. According to reports, this robotic Cheetah reached in the lab about 16 kilometers per hour, and in its current state of development could reach even up to 48 kilometers per hour.

“Many sprinters like Usain Bolt not exercise his legs move particularly fast moving, but actually increase the length of his stride by pushing down harder and doing more force into the ground, so he can run more while maintaining the same frequency” added Kim.

Being able to control the force of each leg, the robot maintains both stability and agility and dynamism. The MIT quadruped robot can be used in rescue missions and its main sponsor known as DARPA, an institution that develops military technology and are highlighted by the development of similar prototypes.