Manufactured by Axis, this tiny four centimeters gadget fit in the palm of the hand and can be operated via a remote or control from a smartphone or tablet, either Android or Apple. 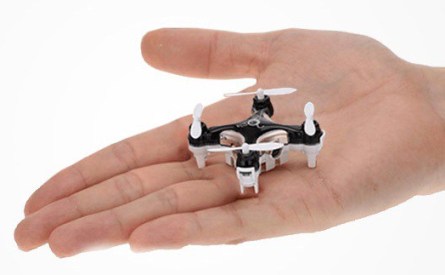 It is so small and lightweight – weighs approximately 0.55 grams – users in the US no need to register, unlike large drones, according to a new law that took effect in December and that has made thousands of people document their device.

Although it is designed for those who want to enter the world of drones’ entertainment, it can also be useful for architectural work.

Details
The Vidius is a four-helix drone capable of flying up to 30 meters, making 360 degree turns while recording and transmitting live video at a resolution of 420p, indicating Axis in their website.

The robot, which also takes pictures, sends the information to the user via wifi, and provides a “first person” perspective, since its camera is attached to the front.

The recorded material can be shared on social networks through an app, which also offers the option to send files by mail.

More options
Another feature of the Vidius is that it has three “speed” pre-programmed, with which the user can experiment according to the type of filming that they want. It has six axes of stabilization and various colors LED to be identified at times of low light.

It is charged via USB in just 20 minutes and can fly between 5 and 7 minutes, long enough to capture interesting shots of interiors and exteriors.