The phone is the second version of Yotaphone. It is designed by a Russian company (Rostec) and has, in a sea of devices that seem increasingly remarkable distinctive: a secondary electronic ink display (the same type of screen that uses the Kindle, for example). 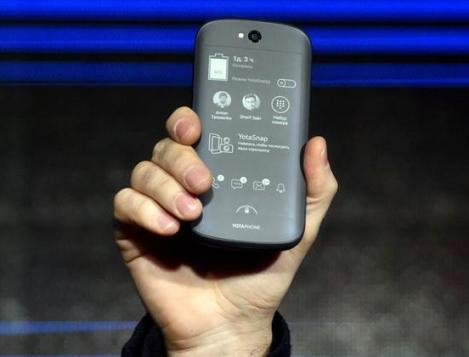 And formally presented in London. The first Yotaphone was announced in 2012 and went on sale a year later, shortly before – earlier this year the second version, which is now finally met the performance and the price was announced.

On the back of the device secondary E-Ink display, touch-sensitive, 4.7 inch and resolution of 960 x 540 pixels. By using electronic ink, consume power only when it changes state, when it is updated what it shows – from what it allows to arrange information that is seen in permanent form (the time, the weather, a notice of missed calls) with a minimum impact on the battery.

Rostec modified Android 4.4 having device enough to allow sharing content with that secondary display, which is also sensitive to touch and interact with it. It is possible, for example, typing a message in this electronic ink display or directly transferred across the interface of Android that second screen.

The good news, though, is that you can use the e-ink screen with any application, not only those that are specially prepared for this device.

Obviously applications that benefit most are those with lots of text or static content that is most of the time; not suitable for motion videos or games. But to read a book, a mail or text of a note or blog; to look at a chart, a map or a recipe; to take a look at our timeline of a social network or to avoid having to turn on the main screen (the element that consumes the battery in a portable device) is a very interesting alternative. Electronic ink is 7 times more efficient than the AMOLED screen on the front, which improves the autonomy of the device.

The electronic ink display is slow, but fast enough to allow full interaction to type a message in a chat application or answer email.

The company will sell it to 700 euro in Europe.