The notebook is called RocketBook Wave. And it is intended as a temporary scorer, relied on technology to protect their content, rather than in a notebook that is preserved for years and years: it is a twist to the classic scorer that we carry from one side to another and that once depleted its pages, we throw away or not return to open ever. 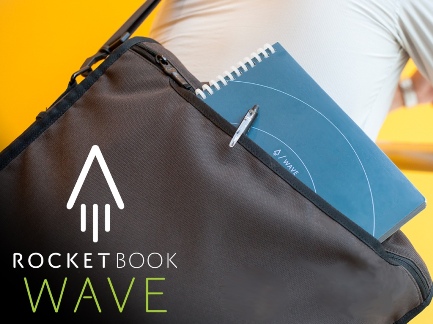 The idea of Rocketbook is not that what on its pages is noted down remains written there for years, but that task falls to a smartphone: each page has a QR code to facilitate the finding of the photographed page (which can be stored on a remote server to preserve it), as a more natural alternative devices that write on a screen, but they fail to provide ductility and precision of the paper.

Why should the user take pictures to the leaves? Because when this notebook spends a few seconds in the microwave, the pages turn to be white again, to make it possible to write them again. It does this by using a special ink: unfortunately does not allow write with any ballpoint or pencil, but a Pilot FriXion, a pen with temperature-sensitive ink which evaporates when it reaches 60 degrees (hence the use of microwave). The company says that pages should offer about ten deleted.

The basic package has, in the US, priced at $27 for a notebook and a pen. The company made a first round of financing collective on Indiegogo (gathered nearly 1 million of almost 25,000 concerned to send 35,000 notebooks), and now seeks support in Kickstarter, where already obtained commitment to sales by another half million dollars.