In the market there are covers for iPhones and smartphones that can turn them into anything. Some even weapon shaped. And these are quite realistic. But it had never occurred to the contrary, that a weapon had the form of a Mobile phone. Until today, of course. Because the Ideal Conceal Pistol, recently filed in the US, it seems, at first glance, a next-generation smartphone. But it’s a 9 mm small caliber pistol as deadly as any other one. 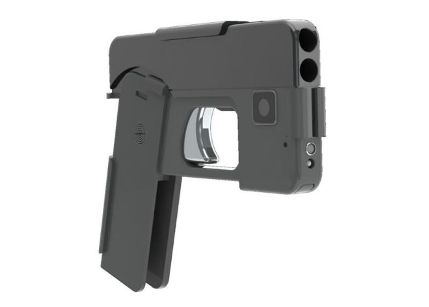 The gun, which is designed to go on sale for $395 later this year, even has a web in which explains its main features. According to its creators, the product has a pull-down handle that exposes the trigger and two mouths, hidden mode connectors for headphones, fired two bullets at a time.

As explained by the company’s CEO, Kirk Kjellberg, “it is ideal to make use of the Second Amendment of the US, which allows firearms to all citizens, but without that no one will notice”. And that can be comfortably worn on the back or front pants pocket. And nobody will know.

Naturally, the gun is already causing quite a controversy and the National Association of Organizations of American Police said against it. What’s the reason? It could make their job much more difficult when trying to disarm a suspect. In any case, the invention is being a success in the US where its creator says it has already achieved before production, more than 4,000 orders in advance.