GoTenna, a device that allows you to create a wireless communications network for medium range where there is no cell phone service, using any Android phone or iPhone, and an antenna that can enter into any backpack, and has its own battery. 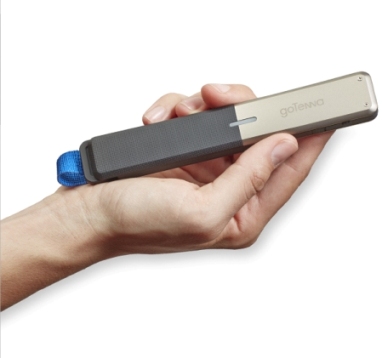 The idea behind GoTenna is to allow anyone who has that antenna to communicate with other users relatively nearby, in areas where no mobile phone service, and rural areas, mountains, places where the congestion charge falls – a stadium – other countries not to pay roaming, and so on.

The two Brazilian created it (Daniela and Jorge Perdomo) and went on sale in the United States. And it is a decentralized service, similar to the operation of a two-way radio, but it serves to transmit text messages rather than voice.

Each user must have an antenna, which is linked to their Bluetooth (sold two $300 in the United States, but now they sell them at half price). Send messages at no cost; only pay once for the antenna. Messages can be sent to multiple users, provided that their antennas are within the reach range. GoTenna provides coverage of up to 80 kilometers; varies, of course, depending on the type of land (in a city reach is reduced by half, according to its creators).

It is the first service to offer something that is, providing instant messaging without relying on a central server. The most popular in recent times is Firechat (a free application for Android or iOS) that works similarly; requires no additional hardware, but it depends on the scope of the Wi-Fi for each cell. That is to say, it is for offline chat with geographical proximity. One difference, however, is that all those involved a session of Firechat extend the scope of the network, and it’s a conversation anonymously and group; GoTenna functions like SMS (sender and recipient identified), with all messages encrypted, and the possibility of having private conversations, chats or send anonymous public message to all users that are in range of original antenna connection.