The prototype combines a hybrid design that emulates the performance of a helicopter and an airplane for vertical takeoff and horizontal displacement to 120 meters; the company promises delivery of orders less than 30 minutes… 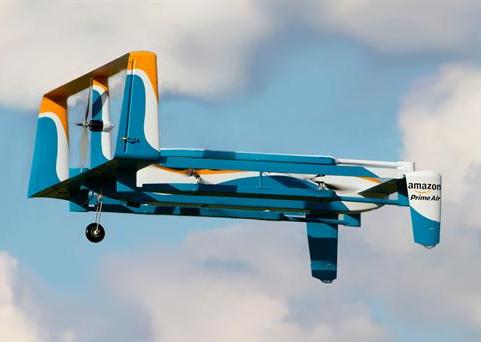 Two years ago, Amazon announced Prime Air, a delivery service packages using UAVs. This year it obtained the authorization of the Federal Aviation Administration (FAA) to carry out tests with different prototypes that will be part of this innovative service.

Meanwhile, the company led by Jeff Bezos unveiled a new version not manned of its aerial vehicle, with a design that combines the features of a helicopter and an airplane to play a vertical takeoff and landing with a horizontal displacement while making the journey to 120 meters high. According to Amazon, this prototype allows it to meet its deliveries more efficiently and safely, and have a system of sensors that will identify and avoid obstacles.

The drone can load packages up to 2 kilos and one quarter, and expects Amazon hopes that the Prime Air Service covers an area of 24 kilometers from a distribution center of the company, with a delivery time of less than 30 minutes.

“We will implement the service when regulatory standards are ready to operate with these aerial vehicles”, said the company in a statement posted on its official site. With a design that is far from definitive, which may evolve over time, the prototype is being evaluated in the distribution centers that have Amazon in the US, UK and Israel.