Canon expands its range of handheld camcorders with three new compact models: two X series professional, The XA25 and XA20, LEGRIA HF G30 and for advanced amateurs and students of film and video. Canon HD Video System has experienced a total redesign, from lens to the image sensor and processor, in order to achieve new levels of imaging performance. 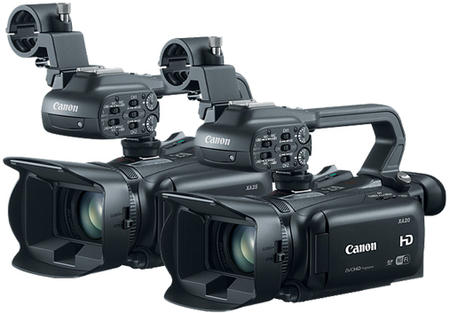 These three models of camcorders offer an imaging system developed to provide quality and versatility. The new wide-angle lens with 20x zoom focal range of 26.8 to 576 mm1, applied optics technology used in the XF305 camcorder, the highest in the Canon range.

The system Optical image stabilizer (OIS) 3 mode incorporates improved OIS Dynamic mode that further reduces the effects of camera shake during recording. The circular gap of 8 sheets also allows to get a better background blur, through the use of Electromagnetic Diaphragm technology, which ensures the beauty of the photos with the background out of focus in shots with shallow depth of field.

The sensor type HD CMOS Pro 1/2, 84 “and 2.91 megapixels ensures a dynamic range and good results in low light. The increased size of the sensor transducer maximizes photosensitive area. The processing power of DIGIC DV 4 provides an improved image reproduction. The sensor and processor work in combination to eliminate the effects of camera shake.

All new models are compatible with various recording formats. The AVCHD format (up to 28 Mbps) and the MP4 format (up to 35 Mbps) transfer speeds allow faster bits. Video is recorded in separate slots for SD3 in a series of resolutions and fps (frames per second) up to 1080/50p, with options for slow and fast recording in MP4 mode. They also allow simultaneous recording formats on each card, which gives the user the ability to record at the same time high quality video with full HD in the desired format and smaller MP4 files.

XA25 and XA20 camcorders incorporate the same concept with detachable handle released with the Canon XA10. Easy to assemble and disassemble, the top handle has a number of additional controls, including XLR inputs are included for professional sound recording via an external microphone. The handle incorporates an IR lamp to improve recording capabilities, ideal for night or nature documentaries and wildlife at night.

All three new models feature a compact ergonomic design that facilitates the recording control. The OLED touchscreen of 8.77 cm (3.5″) and 1.23 million pixels exhibits greater resolution and contrast and improved color reproduction. The user controls the exposure, because thanks to a combination of touch screen and customizable control dial can adjust aperture, shutter speed, iris, gain and exposure. 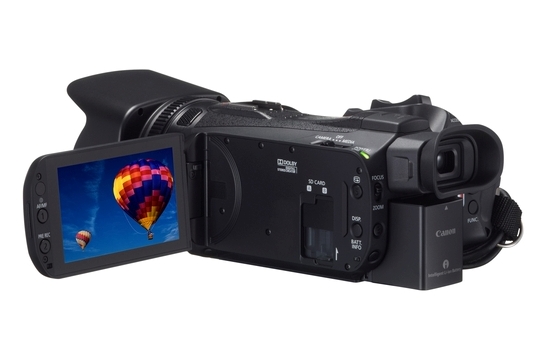 The zoom and focus are activated by an adjustable ring located at the front of the camera lens. Also, a new zoom lever integrated into the camera body makes recording both when holding the camera with hands as when mounted on a tripod. Electronic viewfinder (EVF) improved 1.56 million pixels and 0.61 cm (0.24″), can be tilted up to 45.

The XA25, XA20 and LEGRIA HF G30 feature rich connections with physical inputs designed to maintain connections accessible when the camera is held in the hands. These camcorders have integrated HDMI terminals, microphone, USB and headphones. The XA25 features an HD-SDI output; high capacity connection without compression, the utility is the professional broadcast on television.

WiFi connection
All three camcorders offer the novelty of the WiFi connection integrated dual-band (2.4 GHz and 5 GHz). Remote Camera function allows the wireless setting of the various parameters while using the Remote Browser can review the recorded video with the camera from the browser of a smartphone or tablet, without playback software. The FTP File Transfer allows transferring the recordings to FTP servers up to 150 Mbps. With Media Server can use WiFi to play the videos stored on a camera in televisions and computers. You can also upload videos directly to iOS devices using the Movie Uploader.

Along with the release of these three models, Canon has announced that it is developing a new target for fixed focal film 35 mm for digital cameras with large format single sensor. Compatible with a wide range of sensors of various sizes (including the super 35 mm, 35 mm full-frame and APS-C), the new objective of 35 mm for EF mount will be the sixth objective of fixed focal range of the Canon EF for cinema. It is expected that the official release is made along this year.

The objectives of fixed focal EF high precision for cinema offer optical performance capable of satisfying the creative recording options and are part of the Cinema EOS system, sold in late 2011. Every Canon EF Cinema has a fixed focal diaphragm 11 bits, ideal for manipulations of the depth of field and creative blur.

HD Video Recording
Other developments of Canon for this year will be to update the “firmware” of three cameras of its Cinema EOS System, as well as a selection of new features in their software program Cinema RAW Development (CRD). Following the launch of the various updates, EOS C500, EOS C300 and EOS C100 will be compatible with a new feature that allows you to check the focus on the LCD screen in different parts of the image and not only in the center.

The EOS C300 is also updated to offer all kinds of help. The functions Forced Auto Iris and AF Single frame provide versatility for the recordings carried out by reduced production equipment. The EOS C300 also expand its performance with HD video recording at 1,440 x 1,080, 35 Mbps, so appropriate for the TV broadcast.

As for the new software features Cinema RAW, supplied with the EOS C500, the update will be compatible with the standards Academy Color Encoding Specification. The Transform function of the input device will enable the generation of files processed Canon RAW Cinema, in an OpenEXR file format compatible with ACES. Another new feature points for specifying input/output before processing the RAW recordings, which reduces workflow place both set and in postproduction. Firmware updates for EOS C500, EOS C300, EOS C100 and CRD software will be available later this year.