Researchers at the Massachusetts Institute of Technology (MIT) developed a device – called RF-Capture – that can capture images of the human body and identify a person standing behind a wall. 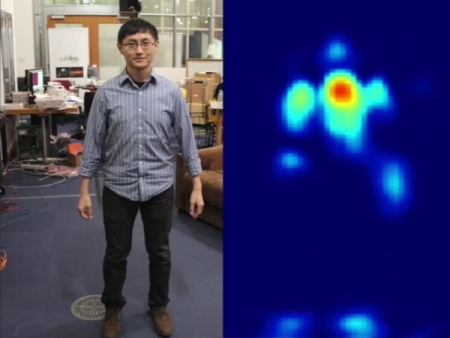 The device, which will be marketed in about a year, can distinguish one person from another and even trace the hand of humans if they write in the air without the need for sensors in the body or cameras in the rooms.

RF-Capture operates by emitting radio signals from low-power that can pass through a wall and rebounding into the body that is on the other side; then the images are captured by the device, which combines information from multiple reflections to join the silhouette of the person.

The researchers, who are part of the MIT team Laboratory of Artificial Intelligence and Computer Science at propose that the technology can be made available for applications ranging from video games and movies to hotlines and eldercare.

Today, to capture movements in the film industry, for example, players must bring markers and move in a special room filled with cameras; but the new device could track their movements even if they are behind objects or walls.

In the case of a smart home, RF-Capture could help adjusting heating and lighting based on the locations of the people; and regarding the care of the elderly, it could be part of a system that communicates with a hotline when a family member has fainted, said the experts.

According to the MIT News site, researchers have already incorporated the technology within a derivative of a product called Emerald which is specifically intended “to detect, predict and prevent falls in older people”.

The product was presented to the President of the United States, Barack Obama, in August during Demo Day, an innovation forum taking place in the White House.

The researchers noted that there are “unwanted” uses could be that the new product, as by thieves to determine if a building is occupied or the police to monitor citizens in homes, among others.

“We want to ensure that people are not going to use it for evil reasons”, said one of the researchers from MIT’s, Dina Katabi.

“To that end, we are working on two fronts: first designing blockers who can prepare that someone is traced except by his own device, and, secondly, we need to have regulations that dictate how and when device can be used”, he said.

Katabi said that “privacy is always priority? And announced that RF-Capture is still a year of marketing, but that may be available to be issued before the end of 2016.