The break of the glass that protects the smartphone screen (or the screen itself) is something that many of the cell phone users suffer once in their life, and with the growth in size of these devices (at the time it become thinner), which makes them more fragile and more likely to fall out of your hand, which should be more open, and so on. 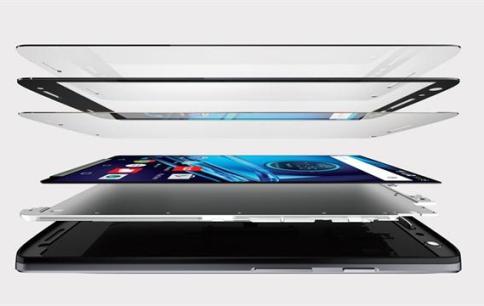 A study by Motorola, at least half of the population had a smartphone, on average, a device that was slit screen; in some countries, such as Mexico, India or China, more than 60%. 23% continued using the smartphone but it was hurting their finger; 42% of respondents said that fix the screen was the largest expenditure they referred to fix the phone.

While companies like Corning are working to create a glass that is resistant to shocks; the company is the creator of Gorilla Glass is in most current phones; the latest version, Gorilla Glass 4, promises to protect your equipment from a fall from one meter.

Motorola designed a different smartphone for its latest concept, Moto X Force. who they are considered “unbreakable”. They promote:

To achieve this, the company created a display of five layers: an outer protective glass, rigid (similar to many users add to their phone), an inner glass protects the screen without breaking; double touch sensor (in case one of them fails, to keep touch sensitivity on the deice); Flexible AMOLED screen made of a plastic substrate, similar to that used by Samsung in their latest equipment; an aluminum chassis to provide structural integrity to the device.

Display with warranty for 4 years
In fact, Motorola sells this equipment with a warranty for 4 years to protect the screen breaks or cracks product from bumps and drops. But not cosmetic damage or scratches generated with the normal use of equipment, and clarify that it is not designed to withstand any damage (and avoid, can be assumed, the judgments of those who seek to find the limit of the durability of the Moto X Force).

The rest of the Moto X Force is more conventional (and is identical to the Droid Turbo 2 that the company sold in the US): A 5.4 inch QHD screen (2560 x 1440 pixels), Qualcomm Snapdragon 810, 3GB RAM chip, 32 or 64 GB of storage (and microSD slot), 21-megapixel camera (with f/2.0 aperture dual LED flash and 4K recording), and a 3760mAh battery with wireless charging, five microphones for noise cancellation, plus 4G, Wi-Fi, GPS, Bluetooth and NFC.

Like other devices, the internal components are covered with a film that protects them from the water, but it is not waterproof. The thickness of the device is between 7.6 and 9.2 mm. Like the rest of the Moto X, it will be sold in different versions of the battery covers (plastic, leather, etc.). It runs with Android 5.1.

The device will arrive next month to Latin America. When it comes to money, the only thing that is known is that will in England (499 pounds); in the United States, the Droid Turbo 2 (the same device, but for the Verizon operator) will cost 624 or 720 dollars, according to the internal storage.