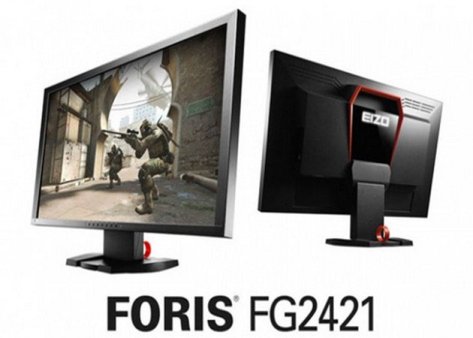 It has viewing angles of 174 degrees, static contrast ratio 5,000:1 and less than 1 millisecond response time.

Its star feature is the signal conversion from 120 to 240Hz to control the blinking of LED backlight with Eizo’s Turbo 240 technology.

The monitor has default modes with different color controls for first person shooters or real-time strategy, respectively. Users can use their own calibration or include others that may be downloaded in ScreenManager Pro for Gaming software and have been prepared by professional players.

Eizo says that the characteristics of the monitor increases the visibility of dark scenes and therefore will be more simple detection of enemies as well as minimizing the delay of entry of commands from the keyboard, mouse, or the driver that we use.

The EIZO FORIS FG2421 has HDMI, DisplayPort and DVI-D inputs, plus a USB hub and headphone jacks, and an output jack for connection to external speakers. Its base supports adjusting height, tilt and swivel and has a handle for transporting it to a LAN Party or gaming event. We have no official price.