Who does not remember the old and noisy printers that print took minutes each sheet? Or the defective ink prints run for over 10 years? Current printers printed with an infinitely better quality from those early technologies thanks to the thousands of hours of research of dozens of scientists. 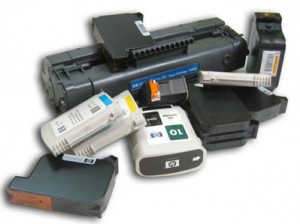 In fact, HP, before finding the right formula of inks that use their printers, performed more than 1,000 prototypes to establish the right balance between all components. This work has resulted in the last 20 years more than 100 new inks … We explain the secrets of these innovations.

If we saw a cartridge of ink while printing to slow motion we would be shocked. Its 500 nozzles of the size of a third of the thickness of a human hair shoot up to 30 million of small ink droplets per second, which requiring pinpoint accuracy. The simple mismatch of some of these tiny holes would be a deficiency in print, both color and level definition.

That is why one of the most important departments at the level of innovation and brand development is precisely printer cartridges and toners, where ink is the spearhead of the system. To ensure that this does not become plugged nozzles, the color is more real, which hold more potential external aggressions such as water and reaches to last up to four generations are invested large amounts of money and time. As explained from HP, “more than 100 chemists working on the development of formulas. This task may need 3 to 4 years of research”.

AND is that, in the words of this same brand, “the cartridge is the most complex element and studied a printer already that accounts for 70 percent of the mechanical system of the same”. Basically, using a similar automobile that exemplifies the importance of the ink cartridges, “every time you replace a cartridge in the printer, it’s like if you change the engine of your car”, he explained.

Is it important to use original spare parts?
A recent study conducted by QualityLogic consultant compared Original HP cartridges versus compatible. According to the report, getting original cartridges, on average, print almost 35 percent more pages than those not-genuine. But the differences are not only quantitative, according to this analysis, but the quality is also affected. As the study notes, the supplies that were not original had a failure rate of 15.7 percent, compared to less than one percent certified genuine HP accessories.

The report highlights the importance of research in this sector where it is annually invest millions of dollars to get the printers become more reliable. In fact, to improve printing system will require more than 1,000 prototypes to certify this improvement.