After detailing how it works in a conventional call, proceed to detail thoroughly a call on a complete VoIP phone systems: 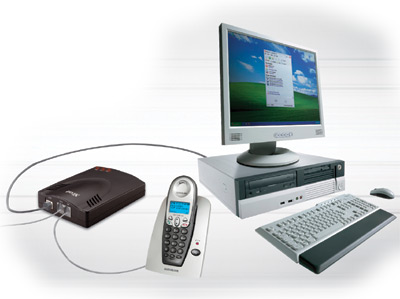 First: It should generate a signal from the computer or device that starts the conversation, this in turn is sent over the Internet to your computer or from your computer. Well this also depends on the type of VoIP and the company, the source and destination may be normal phones, and the call would only partially through VoIP, sometimes even without the user knows about it.

Second: Then a translation phone number (or user ID) with different addresses used on the Internet is performed, called IP addresses. This will be made ​​automatically by the software, but it is necessary to map the different users and phone numbers to their corresponding network of Internet data.

Third: To answer the person on the other side on the computer, start talking through his microphone. The software on your computer digitizes the voice, compresses it, the part into pieces, sends packets over the Internet (usually TCP/IP), and releases the connection, allowing links to other sites or programs through the network, at the same time.

Fourth: All packets travel through the Internet, not necessarily by the same route, but all to the same final destination: the computer that initiated the VoIP call.

Fifth: The destination computer takes packets come to him this occurs within a tolerance of time, resets in the correct order, converts analog voice, and send it through the speakers or headphones to the computer. Thus, the person hears what the person spoke only a few milliseconds ago.

Sixth: After this goes both ways, until the call is cut off, in which case the flow of information between the two computers.

The end result of this is that the “bundling” of voice makes the process consumes much narrower band than normal, and it can send by data channels not normally have a cost per minute, but a fixed cost per month as a cable modem or DSL connection.