Another major manufacturer who believes that there is a place for affordable desktop consoles, made with mobile hardware and Android operating system. Yes, the medals are for Ouya, no doubt, but along the way have appeared lots of alternatives, and even Sony decided that its portable console could have a version for TV. 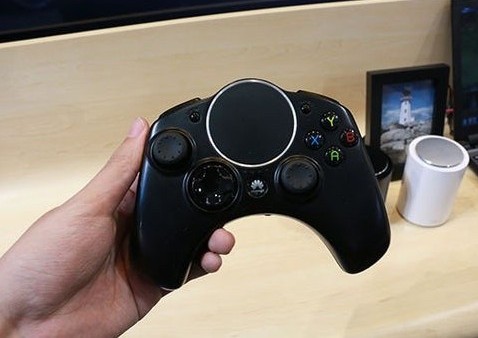 The present case is that of Huawei, besides phone giant has submitted its console Tron in CES 2014, without making any noise. Not much official material, just some pictures and contact wires in a booth at the fair. Very possibly it is trying to gather first impressions of the idea, and then releasing it in the Chinese market.

Appearance of Mac Pro, control with touch pad
The appearance of Huawei Tron, cylindrical style of the new Mac Pro from Apple, rendered in black and white, with a very simple design, elegant in both cases. Noted for its small size and by count at the top with a silver circle making hat. The ports are all located in what we can interpret as the rear hub.

Another story is the command, which is presented as a wireless option, with built-in touch surface, and circular design. It will come to move through the menu of the console, and endure some touch game. These are available in the same color as the console, and the other elements are in a regular joystick generation.

Officially no model is specified, but at this point we do not expect anything other than a Tegra 4 in there (Ouya wearing a Tegra 3).

The connectivity options are expected: a USB 3.0 port, HDMI output, Ethernet (in the final model), and of course WiFi, and Bluetooth 3.0, which is the option using the remote to communicate with the console.

Turning to software on Android, Huawei has designed the thing with large frames-based interface – ideal for TV – reminiscent of many other things (Xbox, own Ouya).

Huawei Tron, price and availability
Huawei is working with developers to twelve games have ready on its day of release, and is for now not appears to be a Google – without access to their applications – so they have to develop their own titles. It will always be more interesting if also will open the doors of Google Play.

That said, there is no information on departure – is expected in May – not on price, but it seems clear that it is China where it is released. Given the characteristics of the gadget, we do not think it will go very far from the $150.