Sound devices are also beginning to integrate Internet connectivity to serve growing streaming music services. This online Logitech has some devices including the Squeezebox Boom, a kind of WIFI music channel with built-in speakers. 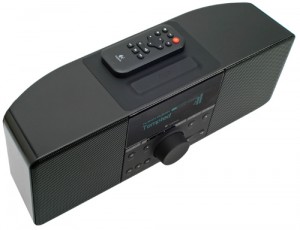 This equipment can be used as radio, since you can connect to any broadcasting online station, as well as transmitter of playlists or songs stored in a computer. Among other things, includes an option to access these even when the source computer off, which is very useful for saving energy and not have to rely on the PC.

The greater attribute of the Squeezebox Boom is how comfortable is its use, since grants mobility which does not allow a desktop computer. It can be used anywhere in the home, in the office or in the garden, whenever there is a WiFi network or roaming the neighborhood with an Ethernet cable.

Beyond the functions of the device and allows you to listen to podcasts, RSS news display and it even has an option to be used as alarm or alarm clock.

As for your sound system does not have too many EQ options, although its 30 watts speakers with tweeters of ¾” double amplification give a quite acceptable quality, which is also reinforced by the Stereo XL system.

The configuration of the computer for Internet access is somewhat slow and complicated in part by its interface (wheel) and the number of steps required in even opening an account via computer SquuezeNetwork. Although it includes a remote control will miss more functional and user-friendly controls. Moreover, the price is also too high for merely supplement.

As main advantages, we should mention the large number of stations that the Squeezebox Boom is stored by default and the extensive range of supported formats: MP3, AAC, WMA, Orgg, FLAC, Apple, Lossless, WMA Lossless, WAV and AIFF.