Panasonic has taught the Lumix GH-3, it’s more advanced camera so far. By the design and conception seems to be a reflex camera, but it is a machine without mirror with interchangeable lenses. The Japanese manufacturer has decided to incorporate one of the most fashionable performances, WiFi connection, which offers a multitude of possibilities. 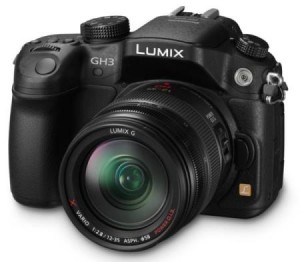 The Lumix GH-3 has a LIVE MOS sensor of 16 megapixels, with an average yield in sensitivity. You can achieve the ISO 12800, ISO rising to 25,600 if we resort to forced mode. Not a bad value, but not at the level of the most advanced cameras on the market. However, in this aspect is more important the control of noise at high sensitivities to obtain the highest number.

One advantage of having moving parts is mirror and improves the speed of the burst. You can shoot up to six shots per second at full resolution and rise to the 20 if we choose a more discreet resolution of four megapixels. It has an improved focusing system its have called Light Speed AF, which in theory get very good results even in low light.

But the disadvantages of being a non reflex are also important. As there is no mirror, we can not see through the viewfinder directly what goes into the goal. For this, we must incorporate an electronic viewfinder. The GH-3 of has a resolution of 1,744,000 points. It is a good quality for an electronic viewfinder, but it cannot improve the best in optical technology that exists in the world: our own eye.

The display is complemented by an OLED touch screen diagonal of three inches. Despite improving quality, has remained one of the most liked features of its predecessor, the GH-2: freedom of movement of the screen. You can move up to 180 degrees horizontally and vertically up to 270. In this way, it is easier to frame photos in strange positions or record video. Regarding this, the GH-3 can record footage in quality Full-HD (1080 dots wide) at 50 frames per second.

But one of the features that is the connection like WiFi. Thanks to this, the camera can be connected to a computer or hard drive wirelessly and make automatic backups of the files. In addition, there is a possibility of using a phone or Android tablet as peripheral of the camera. In this way, we could use the phone as a remote shutter of the camera, or a tablet as secondary display if we are recording a video. Another feature trendier is creative filters. The camera includes up to 14 of these to customize the photos end up taking.

There is still no official price for this camera, but the brand that has unveiled some details. First, we know that will be in the shop throughout the month of November. In addition, with the arrival of the camera, Panasonic has introduced a range of accessories such as flashes, external microphones and auxiliary battery grips.