Samsung has introduced a new SSD, a storage device that is experiencing significant growth due to its use in the tablets and the emergence of ultrabooks (thin and powerful laptops sponsored by Intel). The Korean company is betting big on this platform that is destined to eventually replace hard drives, but its price is still the main obstacle. The new Samsung 840 Pro SSD feature read speeds of 540 MB/s and write 520 MB/s, which is a significant improvement over previous models. 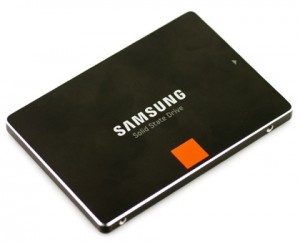 The Korean company decided to focus on developing devices in the field of SSD. Their SSDs (solid state storage devices) have been known for their reliability and power, and thanks to the general fall in prices in this segment are becoming an increasingly attractive option. The new Samsung 840 Pro SSD cards come in capacities of 128 GB, 256 GB and 512 GB, so that its main purpose will be in use for the professional segment and for greater storage capacity.

Samsung also complete this offer with a 64GB model, but have not yet been offered the data on this fourth card with a storage capacity of the most own tablets. The two models of 256 GB and 512 GB will have a cache of 512 MB, opposite to 256 MB of the series Samsung 830 Series SSD. Regarding the difference in speeds between this series and the previous experience, the increase is in the write speed, while the reading remains at the same level.

The new Samsung SSD cards incorporate a SATA 6 Gbps interface and a new driver MDX for 3 cores and ARM Cortex-R4 architecture that will reach a few levels of 100,000 IOPS in random read operations and 90,000 IOPS in random write. The architecture used for these devices is 21 nanometers. These devices are expected to hit the market starting in October.