Samsung pioneered the launch of a tablet format to the general public; we refer to the Galaxy Tab with seven-inch screen. At the time this size was not usually in a tablet and most betting on screens around ten inches. 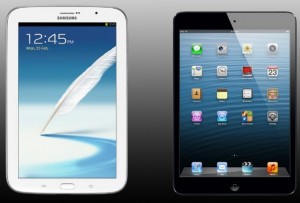 But time has given them reason and because there are several brands that have entered this segment, including Apple’s own iPad Mini. Such tablets are more compact and lightweight, so transportation is more comfortable but at the same time do not give up a large screen, and its price is also lower and herein lays the secret of its success.

The iPad Mini was introduced in October 2012 and by now it is selling better than the rest of the range iPad with 9.7-inch screens. This model integrates virtually the same components as the iPad 2 but in a much lighter chassis, slim and compact. Meanwhile Samsung already had a catalog of seven-inch tablets but have decided to expand with a new eight-inch model. Note the range was extended a few days ago with the new Samsung Galaxy Note 8.0, an intermediate step between the Samsung Galaxy Note 2 and the Samsung Galaxy Note 10.1. This tablet already threatens to become a benchmark in this segment of small tablets, its biggest advantage is the S Pen stylus that also comes with many exciting features.

The Samsung Galaxy Note 8.0 is to make a difference but also to compete directly with the iPad Mini, we compare their most important technical features.

Screen
Although the display of these two models may look similar, the truth is that there are differences that must be taken into account. First the size, 7.9 inches for the iPad Mini and 8 inches for the Galaxy Note, is very similar, since only 0.1 inches difference. But here we must talk about format; the iPad Mini panel has a more square shape which gives a broader effect while the aspect ratio of the panel from Samsung Galaxy Note 8.0 is more panoramic. The advantage of a widescreen is especially noticeable when watching movies, as most are recorded in 16:9 format takes advantage of a larger area without the appearance of two black bands above and below. Instead of iPad Mini panel is very comfortable to read because it is wider, but we emphasize that the difference is subtle.

Moreover the resolution plays for the Samsung Galaxy Note 8.0, which has a ditribution of 1,280 x 800 pixels and 189 ppi density. The iPad Mini has a resolution of 1,024 x 768 pixels and 163 ppi density. With this configuration both offer sharp images in any way without notice pixelated or blurred effect, although Samsung device forward slightly. Finally say that the panel of the iPad Mini is a IPS type that offers better visibility in angle that the TFT of Samsung Galaxy Note 8.0.

Design
The design is a very important aspect of Apple products and the iPad Mini will not disappoint. The Tablet has a very simple form of edges and rounded corners that stands out above all for aluminum on the back that in addition to making it more attractive also provides resistance (it is made in one piece). What catches the attention is the thinness of just 7.2 mm, while the Samsung Galaxy Note 8.0 is not far and is in a very reasonable 7.95 millimeters thick.

The front of the iPad Mini is fully coated glass striking resistant and the screen is very tight to the edges on both sides, this detail helps the device is compact and lightweight (310 grams round). As always found the classic start button under the screen, the power button on the top right corner and the mute switch and volume control on the right side. The iPad Mini is sold in white and aluminum or black and graphite.

The Samsung Galaxy Note 8.0 also has a very slick design that follows the line of the most recent products of the Note range, would become something like a larger Samsung Galaxy Note 2. Highlights include organic shapes with rounded corners and silver bezel that surrounds the terminal. The material used in construction is polycarbonate, a type of plastic very strong and durable, and the finish is bright but we have seen a pattern in black tone. This model is slightly longer than its opponent, but they are just one tenth. The screen is surrounded by a thick frame also regulate and resistant glass is covered. On the front is the physical home button flanked by two capacitive buttons to rewind or open the menu. On the side we find the volume control and the power key or rest.

We can not close this section without mentioning the S Pen, the accessory that makes the Samsung Galaxy Note 8.0 is a different device and it offers very practical benefits. This accessory is inserted into the chassis itself so you always have it on hand and opens up a range of possibilities in the management of the terminal. Since record ideas freehand, sketch, crop images, writing emails and even solve mathematical formulas. The iPad Mini is compatible with similar accessories but has all the unique applications of Note 8.0.

Camera and Multimedia
The tablets, including small form are not devices designed to take pictures or videos. However both the Samsung Galaxy Note 8.0 as the iPad Mini equipped with a set of cameras equipped with which to perform these tasks with adequate quality. The two have a five megapixel sensor in the rear with similar features like auto focus, image stabilizer, face detector and of course 1080p FullHD video recording. In the front have another lower-resolution sensor (1.2 megapixels in the iPad Mini and 1.3 megapixels in Note 8.0) that is focused on the realization of video calling and HD720p video recording. Note that the sensors of the iPad Mini have BSI technology so they are ready to get better results in low light conditions.

The multimedia section is very different in these two models. The Note 8.0 is an Android device and therefore bet by the standardization and compatibility, in this sense, the profile of supported formats is more varied and also account with systems such as the DLNA standard allows us to duplicate the screen in our TV or monitor also with DLNA, is what Samsung called AllShare Play and AllShare Cast.

Meanwhile the iPad Mini, like all Apple products, it is much tighter in this area. For example if you want to add a movie we will have to do it through iTunes and also take into account that should be in a particular format because it does not support videos in DivX, MKV and other file types, therefore we would have to convert the movie to view it without problems. Apple also offers a solution for duplicating screen with Airplay system, but it is necessary to have an Apple TV.