One of the recurring jokes after the presentation of the iPhone 5 was to know when to begin to be felt the first rumors of the iPhone 6, or whatever you call the model that Apple submitted in 2013. But wherever you look, Samsung seems to have also advance in this field: we already have the first clue about the next super phone from South Korean firm. 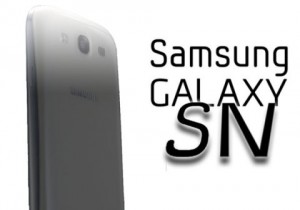 Have been sources of ZDNet Asia that have raised the partridge, ensuring that the Seoul-based company working to have ready the Samsung Galaxy S4 view to its presentation at the Mobile World Congress next year, which would be in February when the fourth generation of the successful Galaxy S family saw the light.

Samsung Galaxy S4 will come with a screen greater than that seen in the Samsung Galaxy S3, although less about what equips the first Samsung Galaxy Note. Overall, it seems that we will see a panel of five inches in the future and rumored new smartphone, which Samsung completely abandoned the concept of mobile use for high-end phones. The technology is OLED screen, although it is unclear whether this will be new systems that have been achieved in this category or AMOLED variation that we have been seeing in this family from the Samsung Galaxy S GTi-9000.

In terms of design, Samsung will incorporate some changes in the outer housing of international model, but along the lines established with the Samsung Galaxy S3. The versions that are marketed in the United States will be a little more different, with a view to haggle potential problems associated with unauthorized use of foreign patents.

The Samsung Galaxy S4, sources insist handled by ZDNet, will be fully compatible with the LTE networks, regardless of the bands that are used in different regions of the globe where it goes on sale. This little message would be a direct message to Apple, whose LTE systems installed on the new iPad and iPhone 5 will not take too well with European networks, since they are only operating in the UK and Germany.

According makers have expressed this rumor; Samsung would launch a policy with this Samsung Galaxy S4 similar to that developed with the Samsung Galaxy S3, so that just one month after filing the new flagship would be put on sale in major markets. The maximum delay added, would be only a couple of months.