Researchers at the University of Tokyo have developed an ultrathin shaped plastic strip thermometer that sticks to the skin and will be available in about three years, reported public broadcaster NHK. The thermometers with flexible plastic shaped exist long ago, but this, adhesive, allow a more advanced, especially in hospital use. 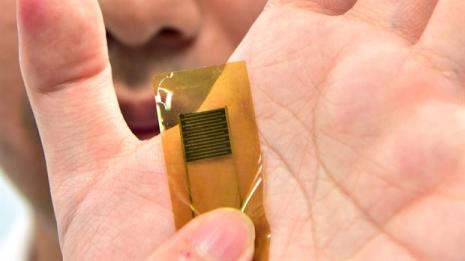 This device, with a thickness of about a quarter of human hair, accurately measures a temperature between 25 to 50 degrees Celsius and recorded oscillations of up to 0.1 degrees. The research director, Takao Someya said the thermometer can be printed on “adhesive strips” and once placed on the skin to monitor the temperature of the human body on a permanent basis.

“For example, applied to a wound or after surgery can alert an infection by detecting changes in temperature due to an inflammation”, said Professor Someya at Japan Times newspaper.

In addition, thanks to this device also can measure “easily” a baby’s temperature, added the researcher, who pointed out that it will not be ready for sale within at least three years.

According Someya, graphite and semi-crystalline acrylate polymer used to manufacture this thermometer materials are cheap and widely used t present in the medical sector.