Microsoft plans to revive a feature that had been removed in its bid for devices with touch screen, and an image posted online showing how it will look; doubts about its availability in version 8.1. 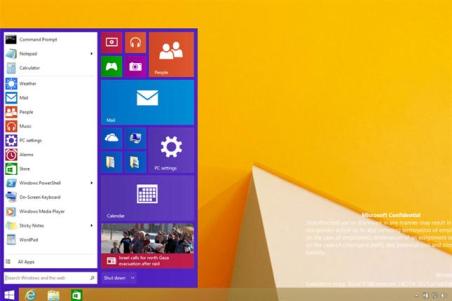 Since the release of Windows 8, Microsoft had to make various adjustments at the request of users, who lamented the removal of the Start menu and the insistent use of the interface known as Metro. Some changes were implemented with the update to version 8.1, but there is still the return of the most requested feature: traditional Start menu.

According to various rumors leaked on the Internet, the Redmond company plans to incorporate the full features of the Start menu in Windows (8.1 incorporates a list of applications, but not the conventional style), but there is no certainty about the availability date of this change.

Opinions are divided as some believe it will be a welcome return for a possible launch of Windows 9 as noted Wzor, one of the usual hackers who usually anticipate several Microsoft releases.

In turn, states that the Windows 8.1 update, known as Update 2, would only fixes and improvements in security, without changes in the performance of the OS. In this way, Microsoft would have everything ready for the Home menu appears in the upcoming Windows 9 as a defining feature.