One of the most interesting printing technologies of recent times is undoubtedly Xerox solid ink, a type of printing has reached a quite acceptable assessments of price and speedy printing. One of its main handicap is the lack of knowledge that still have many users and companies on the major difference is compared to traditional ink, and closer to the laser technology for target audience and performance. 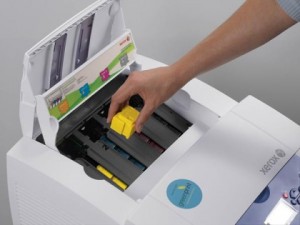 This printing technology uses non-toxic waxes that generate 90% less waste than the comparable laser printers, which is a great advantage when you are removing the remains and have less impact on the environment. Unlike traditional ink printers, its main objective is the professional field. To ensure proper installation in the printer, each has a different way and is numbered.

However, the difference between the two is quite large part of its nature, since the traditional ink is liquid, while the Xerox Solid ink are resins use heat at the time of printing. Of course, the amount of heat required is less than in the case of laser printers, so that the paper leaving maintains a lower temperature.

It is also more reliable if in some moment we use paper that has wrinkled for some reason thanks to the simplicity of the materials used. One of the main handicaps are there in this technology is the price. To combat it, Xerox has been introduced in its equipment (including the ColorQube 8900) a system of counters to qualify for a paid service for printing.

This system provides an intermediate stage between black and white and absolute color whatsoever, so that many of the impressions that other systems would be charged as color with this system have a lower value. Taking as reference the Xerox ColorQube 8900, the first of counters allows up to 256,000 pixels of color prints. The second of the counters, the most interesting, covers a range of 256,000 pixels to 1,400,000 pixels of color. According to Xerox, half this counter can make about 40% of the usual impressions in the business environment.

So that you can get an idea of prices we are talking, for the ColorQube 8900 price of each print in the counter 1 is 0.008 euros, the second counter is 0.032 euros and 0.077 euros of the third counter. Xerox figure by up to 30% cost savings that can be achieved with this technology compared to laser printing.

In the specific case of the Xerox ColorQube 8900, this printer is capable of performing 44 impressions per minute in both color and black and white, with a time to first print of 8.5 seconds. It is also capable of learning behavioral patterns for maximum efficiency during periods of the day in which we usually use the equipment more. The ColorQube 8900 is one of the most advanced Xerox solid ink equipment and has a price of 5,000 euros.