In its new invention, ZTE has given by mixing different devices in one, as different as a point to share WiFi from a LTE connection, extra battery, and a projector, all in a portable size. 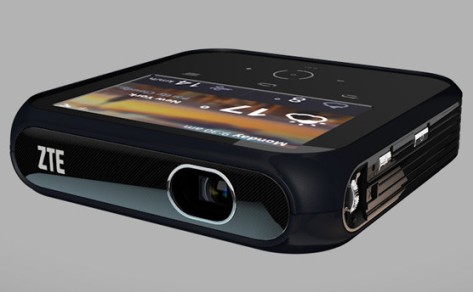 It is called ZTE Projector Hotspot, which are taught in the CES 2014 in Las Vegas, and it seems that the gadget is having acceptance despite its rarity.

The ZTE Projector Hotspot features 4G connectivity that serves as an operator, and it is responsible for partitioning between devices – up to eight – in the form of WiFi. Even there anything new until we take a look at one side, where it appears a projector capable of generating images Full HD in 120 inches.

To govern all possible functionalities have a four inches touch screen – 800 x 480 pixels – on the computer, and your chosen operating system could not be another that Android (4.2 ). In the event showed as example a projected film using the Netflix service.

Battery for all
Another point in favor of the gadget is its 5.000mAh battery that can be used to charge other devices. In addition to wireless connectivity, it is also possible to use a USB to introduce content that we want to project.

ZTE is simply teaching the contraption at the fair, and has not given details about their marketing. We would not be surprised to see a clone appear soon after the idea has shown.